The final jobs report of the year confirmed the strength of the labor market in the face of a cumulative 375-basis point interest rate increase. Unemployment rates remained near 50-year lows and initial claims for unemployment were at levels consistent with a tight labor market. Although jobs were added at the slowest pace this year in November, 263,000, it is still not close to the level of cooling that the Federal Reserve was expecting. Even more worrisome, wage growth was also higher than expected, up 5.1% year-over-year, indicating that a wage-price spiral remains a valid concern heading into 2023.

Lay-off announcements have been on the upswing this year with nearly 77,000 cuts announced in November alone, the highest level since January 2021, when COVID-19 was surging. The technology sector led the way in layoffs with 81,000 cuts through November, the highest level since 2002. The automotive sector, a distant second, announced the elimination of 31,000 jobs. Not surprising, tech-heavy California was the number one state for planned job cuts (103,000) followed by New York (29,000) and auto stalwart Michigan (20,000).

The only other labor market indicator remotely showing any signs of cooling were job openings, off their peak of nearly 12 million in March, but 129% above long-term pre-pandemic averages. As of October, there were 1.76 jobs available for every unemployed person. The job opening rate in the real estate sector increased by over 3 percentage points since the onset of the pandemic, second only to the leisure and hospitality sector and tied with education and health services. 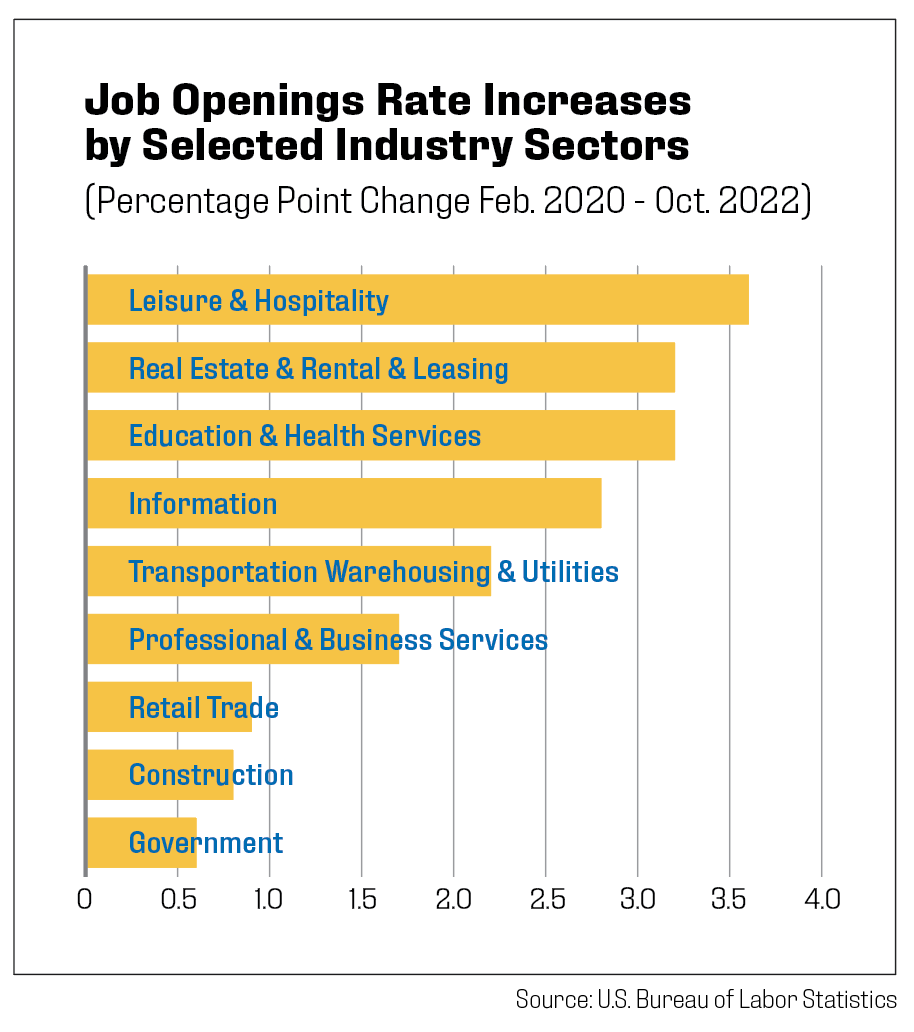 Economic forecasts became increasingly dour as the year progressed, with recession odds increasing and GDP growth projected to be anemic while inflation eases but not to levels expected earlier in the year. Even the hot labor market is anticipated to take a turn sometime in 2023 leading to unemployment rates ranging between 4.0% and 5.0% by the end of the year. By 2024, GDP is projected to grow at a rate more consistent with longer-term averages, while inflation still eludes the Fed’s long-term target of 2.0%. The labor market is largely expected to stagnate, although Fannie Mae’s forecast calls for considerable worsening by the end of 2024 with an unemployment rate not seen since 2014. 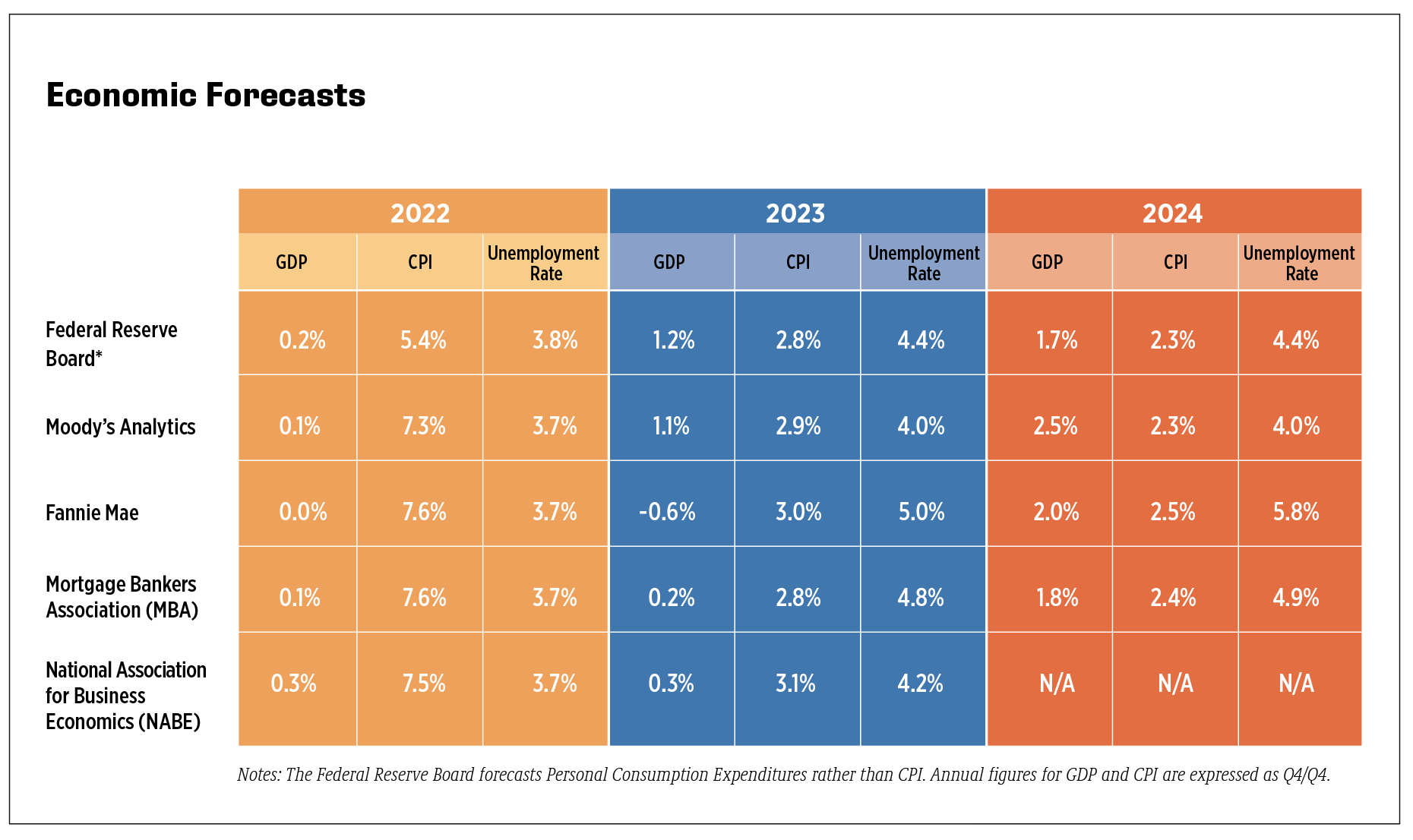 One of the most significant impacts of interest rate increases was evident in the for-sale housing market. Soaring home prices and lack of inventory certainly contributed to weaker home sales, but the doubling of mortgage rates during a nine–month period caused the market to plummet with 2 million fewer existing home sales closing in October than January, a decline of 32%. Home prices have been somewhat slow to react to market conditions, declining just 2.2% through September since peaking in June, according to the S&P/Case-Shiller National Home Price Index. However, home prices were up 10.7% from a year ago.

Housing starts forecasts run the gamut, from essentially flat to decreasing by 26%. In addition to the weakening demand factors for home sales, homebuilders continue to face high costs for both materials and labor, as well as labor shortages. Multifamily construction fundamentals are expected to weaken, which makes sense since by most private sector measures, 2023 will be a decades-high year for new completions. 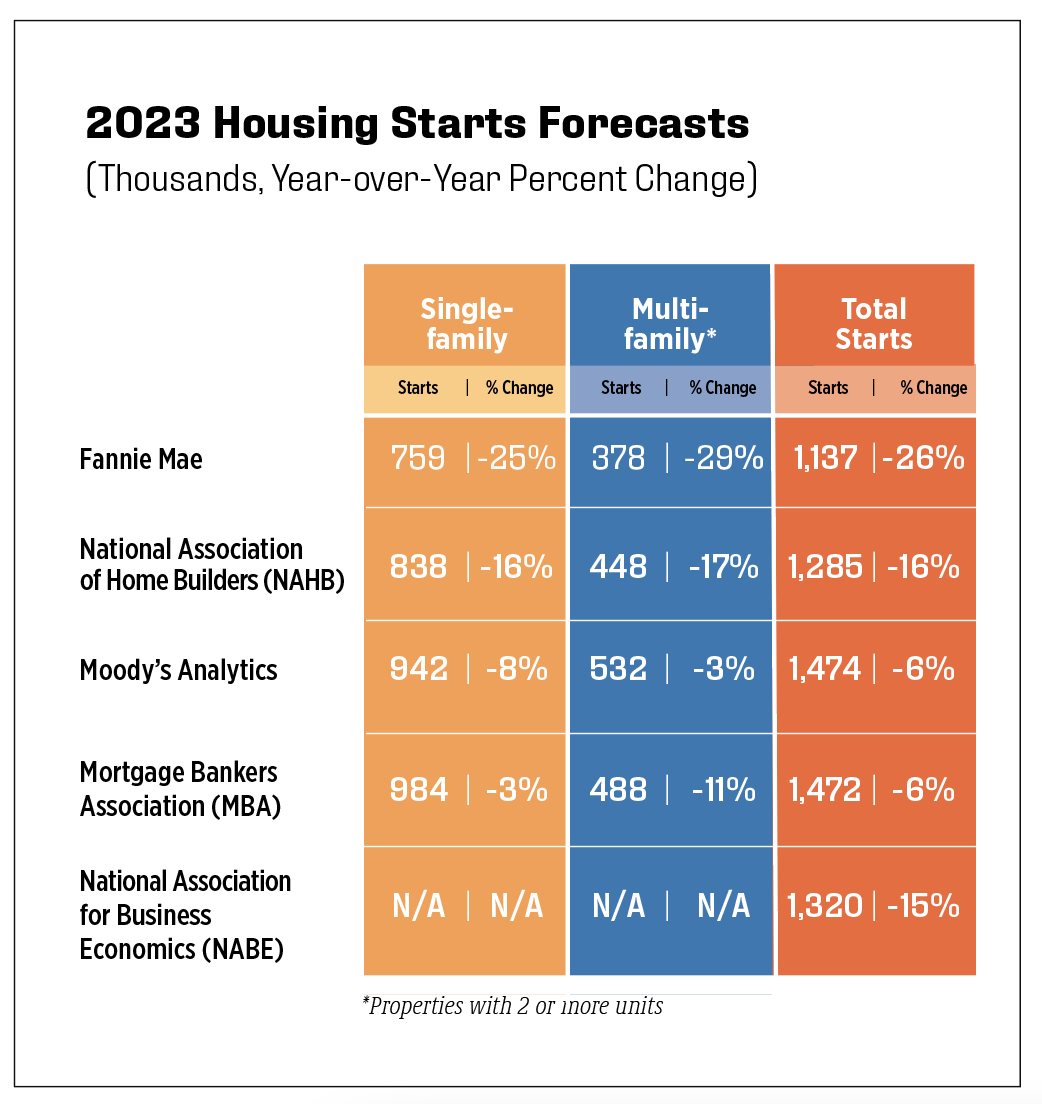 The apartment industry started off 2022 strong, with momentum continuing from the prior year’s best performance on record. But by the third quarter, lackluster leasing activity, negative absorption, decreasing occupancy rates and monthly declines in rents surfaced. Both RealPage and Apartment List reported three consecutive decreases in rents from September through November. Apartment List average national rents declined by 1.0% in November, a larger drop than during the pandemic lockdowns. According to the Census Housing Vacancy Survey, new renter household formation declined in the second and third quarters by a total of 577,000, but this comes on the heels of a post-pandemic boom, which saw an additional 3.4 million renter households. As inflation, including rent growth, has continued to outpace wage growth, layoffs take hold in some industries and economic uncertainty prevails, renters are pausing on making moves and have begun to combine households for cost savings.

Occupancy rates are projected to decrease through 2024, although remain near historical averages. Effective rent growth returns to longer-term norms in 2023, ranging between 2.9% and 4.0% and moderates further in 2024, ranging from 1.4% to 3.3%. The peak supply year coupled with a decline in starts in 2023 results in fewer units being delivered in 2024 and 2025, which will help bring supply and demand into balance in the aftermath of a downturn. 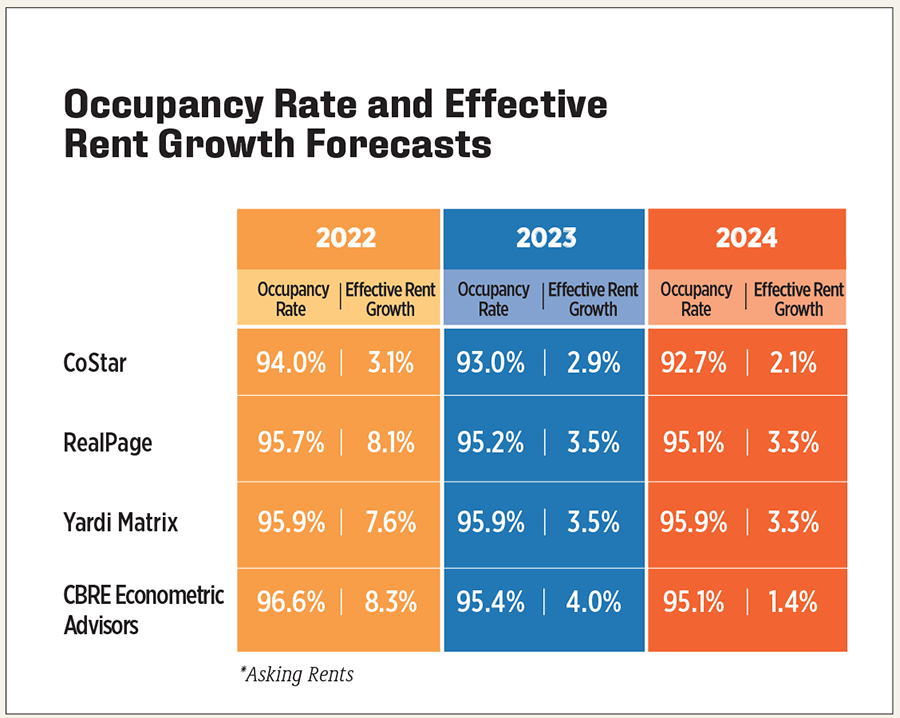 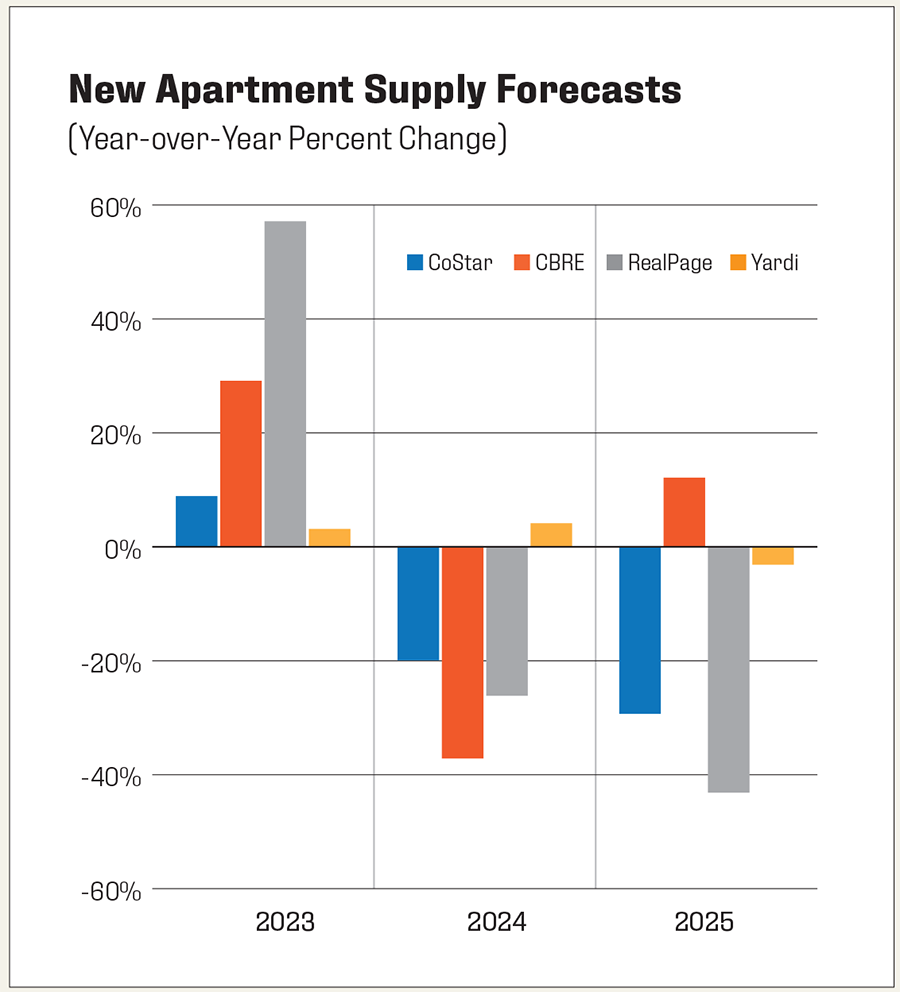 Investor sentiment for all property types showed a steep decline, matching early pandemic levels, in the most recent sentiment survey published by the Real Estate Roundtable. More than three-quarters of respondents reported market conditions much worse or somewhat worse than a year ago, while 70% anticipate conditions worsening over the next 12 months. Among the biggest challenges cited were difficulties with asset valuation, tighter credit availability and the increasing cost of capital, all of which have led to a drop in transaction volumes across all property types.

Labor market challenges, inflation, interest rate increases and challenging regulatory environments will stay top of mind for owners and operators in 2023. Expenses outpacing rent growth will be a major concern next year, the severity of which will depend on the depth of a likely recession. As long as the labor market doesn’t suffer major setbacks, apartment fundamentals overall should be able to post positive gains, particularly in those sectors which typically experience sustained demand through a downturn, such as moderate income and workforce housing. Demographics remain an upside for the industry.  While many older Millennials have already become homeowners, younger Millennials just starting families will be primed for single-family rentals. And more than one in five U.S. residents calls themselves Gen Z, ranging in age from 10 to 25 years old, providing a steady pipeline of demand for apartments in the coming years.